Won’t You Be My Neighbor?

We enjoyed hosting the kinda-annual neighborhood potluck dinner on Sunday evening. We live in the Pennsylvania Chautauqua in Mt. Gretna, established in 1892; at the intersection of four municipalities (confusing for those of us who live here too), Mt. Gretna is the smallest borough in Pennsylvania – all 206 households.  As a group of residents from four streets, we like to share the table and conversations on occasion, rather than being satisfied with simply waving at one another.

We’re most blessed to have some really terrific neighbors; Kathie, Bob, and I represent our block on the Chautauqua Board of Managers, which is the local homeowner’s association. Like six other municipalities in Lebanon County, our borough was overpaid by the Earned Income Tax Bureau (EIT) by about $225,000 for a period of four years. (While we were likely overpaid for many years before that, the statute of limitations makes those overpayments irrelevant.)

That’s a burden for a community of our size. The countywide plan allows us to pay it back over a twenty years with no interest, which is most reasonable. This situation was a topic of discussion at dinner, as well as the new assessment that the Board of Managers needs to charge, starting in January; as a result of the newly adjusted EIT payments, the borough is going to receive about $45,000 less than previous years. The Board of Managers is helping the borough by creating an assessment to pay for our contracted police services of $165 per household; we’ll give the money to the borough to pay the police contract next year for $34,000, to assist in making up for the shortfall (and so they don’t have to raise taxes). As the borough and home owner’s association both represent the same group of people, we regularly try to work together so we represent the people we serve in the best way possible: part of being good neighbors. 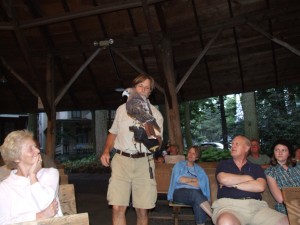 Mt. Gretna Neighbors enjoying Jack Hubley and one of his wild animals

As we concluded this conversation, Don (who had the good sense to marry our lovely neighbor, Nancy, recently) said, “I know I’m new to this community; but I want you all to know if you need help with anything, please call me. I love doing outdoor work. Just ask, I’d love to help.” Kathie and Jim, who live next door, came over early to help set up and stayed later to help clean up. I’ve known them longer than I’ve been married; their daughter was in my youth group and now serves as Lightkeeper’s graphic artist. We’ve been through some pretty stressful times together; Kathie’s vegetable soup or quiche has often comforted me during illness. Jim has been a devoted visitor and support during my husband’s four encounters with cancer and various surgeries. And we had another neighbor who realized Cliff wasn’t able to get the leaves out for collection recently, and spent at least six hours here, blowing the leaves to the curb for pick-up. We are blessed with some really terrific neighbors who care and enrich our lives immeasurably.

For me, Twitter resembles a neighborhood. There are people that leave the community shortly after arrival (about 60% of people who open Twitter accounts sadly abandon them after the first month). But there are also true friends we can find and count on to help educate us, give advice when we’re faced with tough choices, or simply trying to find out information that can sometimes evade us. I have found some incredibly helpful people there, who have supported me personally and professionally. And I hope I have been a help to others as well.

As a native of Pittsburgh, I adored a local public television celebrity who made a career out of talking about being a good neighbor – and making us all feel cared about when we spent time with him. (You are missed, Mr. Rogers!) We have the same capability on Twitter, and other online communities. And it’s usually pretty simple to do: when a question is asked, respond to it. When someone initiates a conversation, take the time to “talk” with them. When someone is lost, and you know where they want to go, offer them direction. When someone seems down, offer them some encouragement. Be a good neighbor, in 140 characters or less. Not only is it an investment in others, but it positively works to help build your community. Show others how good a neighbor you can be…and make Mr. Rogers proud!

This entry was posted in Uncategorized. Bookmark the permalink.