Are You Asking the Right Questions?

The surgery lasted an hour and a half longer than we expected, but they called and warned us from the operating room.  When Dr. Conter came out to explain what happened (during what was supposed to be a routine hernia repair surgery), we got answers to a question I asked several doctors last fall, following the removal of my husband’s cancerous kidney: “there seem to be some digestive issues; what might those be?”  Our surgeon found the bowel intertwined with a larger than anticipated four-pocketed hernia.  After unraveling the mess, he removed six inches of the upper bowel that couldn’t be saved, put things back where they belonged, and closed him up.  Dr. Conter remarked how amazed he was that Cliff hadn’t had a bowel obstruction, hadn’t had significant pain, and could process food at all.  We’re most grateful for the skill of this surgeon, his staff, and the fifth floor nurses at Lancaster Regional Hospital.

So, I’ve been (over)thinking, what questions might have the caught the attention of those two doctors so that this situation could have been better diagnosed?  This story could easily have had a much more unpleasant result.

As a business counselor and marketing professional, I often meet with folks who have an idea of where they want to go, but aren’t sure how they get there – so I ask lots of questions.  One particular client came to me, looking for freelance writing opportunities, as he had just be laid off from a local newspaper.  Before leaving my office that day, we discovered that he might want to own and write for his own publication, talking about what’s happening in the city and describing local travel options.  I didn’t hear from him directly again, but ran into his wife, who now works for him on their publication, focusing on downtown happenings. 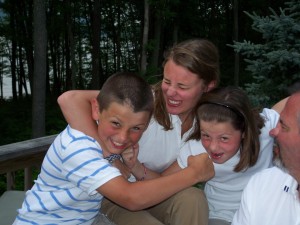 y junior ), has found my insatiable proclivity for more information somewhat annoying on occasion; he often remarked to me, “you ask too many questions.” As he has matured (and is raising three children [yes, that is Joe, looking at his three “knuckleheads” in the photo on the left]), I believe his vantage point has likely changed.

Entrepreneurs frequently need to be asking themselves questions, and searching for good answers or options, on a regular basis.  Examples of those questions might be:

– Before I commit to renewing that annual advertisement, shouldn’t I check what the return on investment was this year?

– You want me to pay a flat fee of $75 a month for phone service – when I make, perhaps, three calls monthly?

– This is the third time the client has returned this copy for changes; what do they really want?

– How could I better explain that the leak in their ceiling is coming from the neighbor’s property, not their own roof, as they don’t seem to understand the situation?

– Should I shelve this idea or not?  What might the ramifications be if I move forward?

– What new initiative is the best fit for my skill and provides the best financial return?

Please don’t waste another second making the same moves you’ve made before and expecting a different result.  Commit yourself to making the most of what you, and your clients, are and aspire to be by asking the right questions.

This entry was posted in Uncategorized. Bookmark the permalink.